The Avenue of the Volcanos 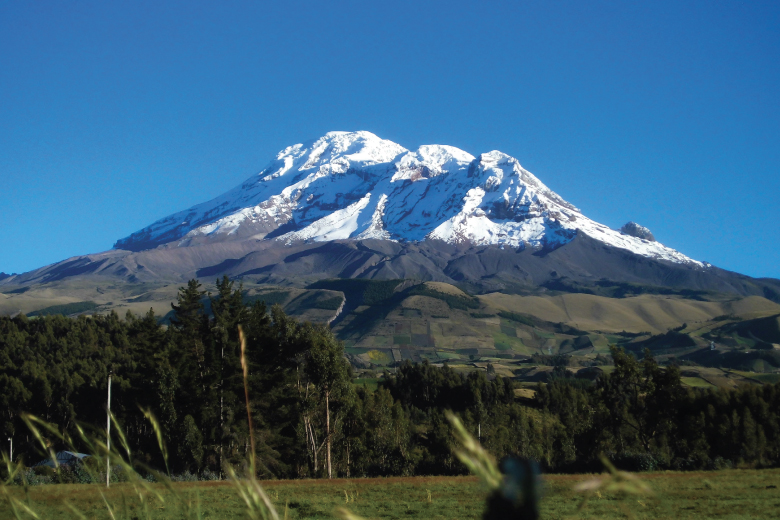 Visit the Andes from North to South

discover the array of greens and golds represented in nature during the ride on the Avenue of the Volcanoes, learn about the flora and fauna of the Andean Moorlands when visiting La Mica lagoon, enjoy a train trip on the Devil's Nose route, visit Cuenca one of the Patrimonial cities and travel overland between the Andes and the Coast admiring the change of vegetation and landscapes.

Highlights of the Program

Enjoy an amazing sightseeing in the Avenue of the Volcanoes

La Mica Lagoon with its typical fauna & flora of the moorlands

Travel by car between the Andes and the Coast

Guayaquil, one of the biggest city in Ecuador, located on the coast

Depart from Quito direction Riobamba. During this trip we will go through the Andean Region, covering approximately 400 km. rightfully known as “The Avenue of the Volcanoes” (German scientist - Alexander von Humboldt -1802). It is a breathtaking natural boulevard flanked by impressive volcanoes, both active and inactive, and giant peaks covered with glaciers and perpetual snow, towering well above 5 and even 6 thousand meters above sea level. On a clear day you might get a glimpse of the geometrically perfect colossus Mount Cotopaxi (5897m), one of the world’s highest active volcanos. Learn about the Andean Paramo (moorlands), enjoy beautiful panoramic views of the Antisana volcano (stratovolcano), a large glacier which at 5,704 m is the fourth highest volcano in Ecuador. In the afternoon continue direction Riobamba.

This wonderful route drives by picturesque villages and presents a never ending line of emerald green valleys, dotted with gold-colored fields providing spectacular sights, a paradise for photographers. The architecture of Alausi is the first thing that will attract the attention of the travelers; churches, squares, houses and small streets, more than a 100 years old combined with the ancient train station gives this town a unique and charming touch. At the scheduled time board the train that will take you down to the Sibambe train station. This train ride will go by the famous “Nariz del Diablo” (Devil’s Nose) a mountain with almost perpendicular walls which is part of the railway linking Guayaquil and Quito. Back in the early 1900s this stretch was considered the most difficult part of the construction of the Trans-Andean railroad linking the two cities. To overcome this obstacle, the engineers came up with an ingenious solution. They would carve the rock in a series of zigzags which allowed the train to climb or descend more than 500 meters in less than 12 km with steep ascents and descents. Whilst recovering from the exciting and picturesque descent, enjoy the views of the narrow gorge of river Chanchán at Sibambe Station. Board the train to go back to Alausí where the vehicle is waiting to drive up to Cuenca located in the southern Andes which for its beauty it was declared Cultural Heritage of the Humanity.

Cuenca has preserved its rich colonial past, beautifully shown on its narrow streets, white houses with flower-pot balconies, impressive churches, with their majestic domes and towers. This is a walking tour in the Colonial area of Cuenca to discover the beautiful churches and house facades; to visit a some of the artisan centers where there is the opportunity to learn about the ceramic, the famous straw hats also called ¨Panama hat¨, gold and silver jewelry and embroidery which are some of the handicrafts for which Cuenca is also known. Afternoon: At leisure: Explore Cuenca at your own pace.

After breakfast drive to Guayaquil. During this overland transfer, a journey of approximately 4 hours, there is the opportunity to enjoy beautiful panoramic views of the Southern Highlands as well as the drastic change in the climate and the vegetation. This change is especially noticeable when we start descending to the lowlands, where the panorama presents large plantations of banana, tropical fruits and Cacao. Arrive to Guayaquil and check in at the selected hotel. There is also the possibility to flight back to Quito

Expedition Tours a privately owned company based in Ecuador, founded in April 2002 specializes in solution oriented travel arrangements for groups or individual travelers in Latinamerica.